Interview on Fear of Speaking and EFT with Janet Hilts 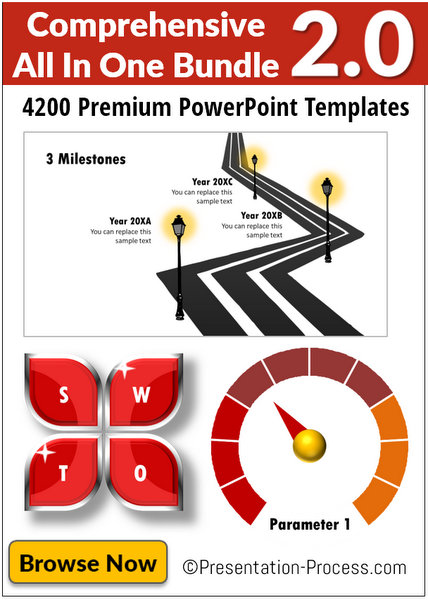 Janet Hilts is an EFT* practitioner and personal coach. After helping people with their physical and emotional health for over 20 years, she found the remarkable tool called EFT.

She helps people with presenting fear overcome various issues like speaking fear, stage fright and discomfort in front of audience. Her website  Fearless Speaking with EFT provides resources for speakers.

In this interview, we talk to Janet Hilts about fear of speaking and presenting and the effectiveness of EFT technique in dealing with this fear. Read on to understand how even experienced speakers face this fear and can overcome it…

Arte: Hi Janet! Since may of our readers are business presenters, I’d like to start with this question:

Do you find a lot of corporate presenters who require help in dealing with their fear of speaking?

Janet: Yes I do. There are varying degrees of comfort, and that’s what I think of in terms of fear of speaking. Many corporate presenters will say, “I don’t have a problem because I get up in front of people.” But if there’s any discomfort at all, that impacts how you communicate with your audience. So I believe many presenters just “buck up” and push on through their fears.

Latest research shows that at least 85% of adults have some fear of speaking. Some people are paralyzed and some are just somewhat nervous. Many presenters lie somewhere along that continuum.

Arte: What are the common issues you have seen that presenters in the corporate arena face? 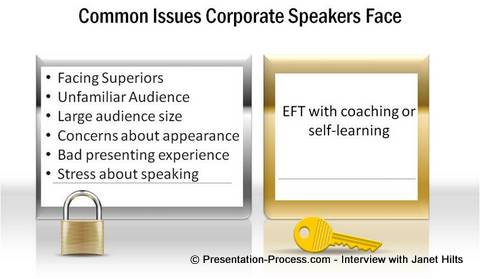 Another issue might stem from the size of the audience. A presenter may feel comfortable in front of 30 people, but be very nervous in front of 300.

A different set of issues can stem from technical skills training a presenter has completed, and their concern about whether or not they’re performing up to the standards as outlined.  Then they’re more turned inward and less connected with their audience, so not as effective in their presentations.

Other issues related to fear of speaking can stem from appearance, with the presenter worrying about their own age, weight, clothes, etc. And of course, issues can stem from unpleasant past experiences.

Related:Fear of Public Speaking and how to overcome it

Arte: Is it common for people who speak often to still retain a fear of speaking?

Janet: Absolutely! There are people who have spoken for 30 years who still experience nausea, or sleep poorly the night before a presentation, get tense and cranky with other people before presenting, etc. For many people the bottom line of fear never goes away, even though it can be reduced over time through just going ahead and presenting.

So if you ask people if they are completely comfortable doing presentations, you’ll get a more revealing response than if you ask them if they have presenting fears. The word “fear” gets defined in many ways, so I talk to people in terms of their level of comfort with speaking.

Arte: That’s really interesting to know that experienced speakers can face presenting fear. Are there some incidents you would like to share regarding this?

Janet: I worked with a woman who had been presenting for over 20 years, without discomfort. She contacted me because she couldn’t figure out why she had started turning down opportunities to present. And seemingly out of nowhere, she was suddenly uncomfortable with the thought of getting up in front of people to speak.

We worked together in our session to discover the root problem of her issue. For her it was a bad presenting experience in which she had felt that she was treated disrespectfully by the event host and had wasted her time preparing for and doing her presentation.

We worked together to dissolve that pattern of beliefs and emotional responses so she started booking engagements again and enjoying presenting.

Arte: What are some of the ways in which people can overcome this fear of speaking?

Janet: What I recommend is using a method that deals with the emotional part of this discomfort. Most people try to manage fear of speaking on a logical level – by studying and learning and practicing.

But fear is not about logic. Fear is an emotion. So it requires a solution that is focused on the feelings part of the issue. Now there are so many rapid-change tools that deal with the emotions in something like the discomfort of speaking in public. So it doesn’t have to take years of therapy, or years of training to do it over and over and over again.

That can make you more accommodating of your emotional challenge, but it doesn’t get rid of it. I recommend a rapid-change technique like EFT, which is the one that I use.

NLP is another good tool – neurolinguistic programming (the basis of Tony Robbins’ work), the Sedona Method, Byron Katie’s The Work – these are the tools I recommend to quickly help yourself radically manage your fear of speaking.

Arte: What is EFT? Can you tell us a little more about it?

Janet: EFT stands for Emotional Freedom Techniques. It’s like psychological acupuncture without the needles. It’s a body-mind technique that uses the same meridian systems as acupuncture. You stimulate certain points on those meridians by tapping with your fingertips, while vocalizing the problem at hand.

With this tool, it’s possible to disconnect the negative emotional influences on your behavior which are almost always rooted in something that happened in the past – some unpleasant experience, or some set of beliefs that you were taught. What EFT does is to unplug that old programming that is making you face a fear of speaking today.

The most natural thing is to actually enjoy speaking, just like children do. What I’m trained to do is to find what those negative experiences are, and then we use EFT to simply unplug them from your system – like turning off that old software program and permanently disconnect it.

Janet: I experienced EFT treatment for the effects of trauma 15 years ago, with good results. But I didn’t realize until much later that it’s very effective for dealing with all kinds of issues besides trauma.

That’s when I started studying it and quickly became completely fascinated and studied under some EFT Masters. I had a background in speech and communications and found I loved helping other people get more comfortable speaking by using EFT.

And then I was surprised to find out I had some of my own speaking fears at networking groups, and also with radio broadcasts, although I was comfortable on stage in front of 2000 people! It showed me how your fears can be different in different settings. I’m glad I had EFT to get rid of those for myself.

Arte: How effective is this technique is dealing with presenting fear?

There are two different ways to use this technique. One way is for the symptom you’re feeling right now – the discomfort in the present. And the other is to go deep with it and find the root problem and use EFT to eliminate the problem on a core level so it doesn’t come back.

Arte: Who is the EFT technique most suitable for?

EFT is suitable for all levels of discomfort with speaking – whether that’s being paralyzed, or just experiencing nervous tension. For people who are just mildly uncomfortable, you can try using EFT on your own to see if you get good results.

For people who are really stuck, I would highly recommend working with a skilled EFT practitionerand,if possible, one who specializes in this area of fear of public speaking.

Arte: Is there any occasion where you have found that it doesn’t work? Are there situations that people require alternate treatments like hypnosis?

Janet: I have not found occasions when it doesn’t work. It might *appear* to not work, because the issue that’s creating the problem is deeper than the one you’re trying to use it on. It’s a simple technique to learn, so many people use it on themselves.

They may believe it’s not working, but it’s because there’s a deeper emotional issue that creates a lot of resistance to letting the fear go. It doesn’t feel safe to let it go. So the problem was not that EFT doesn’t work, it’s that it wasn’t focused on the issue causing the problem. That’s where experienced practitioners can help.

For some people, an alternate treatment might feel like a better match than another tool. I’ve had a lot of people come to me when they have tried it themselves without success, or with another practitioner without success. There are many levels of expertise in using this tool. Of all the tools I have tried myself, I find EFT to be more effective than hypnosis, EMDR, talk therapy or traditional speaking training grounds like Toastmasters.

Arte : Thank you Janet, it has been a real pleasure chatting with you and learning about this new technique called EFT.

Janet: Thanks again for this opportunity!

You can find more information about EFT at Speaking Made Fearless. You can experience it yourself by signing up there for a Stress-Free Speaking Starter Kit, which includes instructions and an audio for this very simple, but effective technique. This will give you a sample of using EFT for relieving your current stress about speaking. A practitioner can use EFT to get to the root of the issue and relieve that so it doesn’t return.

Related: Are your nervous hand gestures giving you away?

YES, SEND ME THE FREE ECOURSE