Learn the pitfalls to avoid while using Images in PowerPoint. These tips will help you make your slides more professional.

Pictures in PowerPoint are Powerful

Nothing gets your audience attention better than a set of relevant pictures. But, when used wrongly, the same images can turn into an eyesore.

Here are 5 mistakes to avoid while using pictures in your business presentations:

1.    Sticking pictures of inconsistent sizes on a slide

Take a look at the following slide:

Though the images used in the slide are relevant, they look unprofessional because of the inconsistent sizes. The problem is made worse by sticking the images randomly all over the slide.

Your audience deserves better. Edit your images, to ensure that there is some level of consistency in the look and feel of your images on the slide.

See the angle of the shadows in the three pictures:

Though the images are adjusted for size and placement, they look unnatural because of the wrong usage of shadows.

Whenever you use shadows for images, make sure they are consistent.  Decide on a single light source and let your shadows be as per the direction of the light source. If one of your image already has a shadow, crop it out or get the other images in sync.

3.    Using pictures of different type on the same slide:

Take a look at the two images in the following slide: 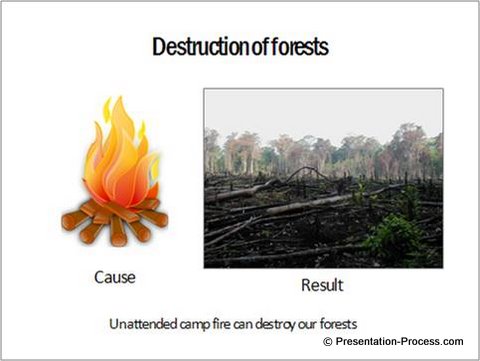 The one on the left is a ‘vector’ image (most clipart images are in vector format) and the image on the right is a ‘raster’ image (most pictures are in raster format). You can easily differentiate the two types by the way they appear.

When images of two different types are placed on the same slide, they look inconsistent. Stick to one image type on a slide to give a professional feel to your presentations.

In the above slide, the presenter used ‘Reflected perspective’ picture effect to one image and left the other image untouched. This makes the slide look unprofessional because half the pictures in PowerPoint slide has a 3D perspective and the other half has 2D perspective.

Make sure that all the images on a slide have a consistent perspective. Otherwise your audience will be left confused.

As far as possible ensure that the type of icons used on a slide are consistent. There are tons of good icon sets available on the net for free. Check IconArchive for a good collection. Spend some time and effort to choose consistent icons to support your message.

Related tutorial: Learn to make your own consistent icons in PowerPoint

Conclusion about using Pictures in PowerPoint:

Remember, there are no rigid rules in using images. The five points we discussed were meant to set you thinking in the right direction. It pays to give closer attention to the way you use images on a slide, because many times small mistakes escape our attention.